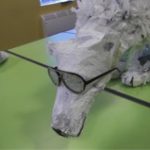 Come and visit the polar bear at Ludlow Green Festival and enter the competition to name it.

This model of a Polar Bear is a combined project between The Furniture Scheme, Ludlow 21’s 3Rs group and the Green Shropshire Xchange, who provided the necessary funding – and of course, Jessica Jackson who led the workshops to create the Bear!

The Furniture Scheme and the 3Rs group are both committed to reducing waste and to devising innovative ways to re-use and recycle as much as possible. Ludlow 21 focuses on environmental issues.

The 3Rs group and the Furniture Scheme work closely together and the Polar Bear project came about through that working relationship.

Three craft workshops, led by Jessica, run by the Furniture Scheme as part of their Holiday Scheme, took place at Rockspring Community Centre during which the Polar Bear was created out of chicken wire, plastic bags, old t-shirts and sheets – all of which would otherwise have gone to landfill.

Polar Bears are in danger because of two things:

Their habitat is threatened because the world is getting warmer so their home on the polar ice is melting and there is much less for them to eat in the oceans where they live.

And the oceans are full of all kinds of plastics which are thrown away from cruise ships or just dumped into the sea which poisons the water and the fish and creatures which live in them – and then poisons the animals, like the polar bears, which live off the fish.

Thinking about all this – can you find a name for our ‘Rubbish’ Polar Bear?